This essay was first published as a feature for THE Magazine on December 1, 2016.

The night before the indigenous art collective Postcommodity planned on suspending twenty-six balloons along the US-Mexico Border, winds kicked up, threatening the next day’s work and the culmination of the project, Repellent Fence/Valla Repelente. In the face of a force that was out of their control, Kade Twist, Cristóbal Martínez, and Raven Chacon, Postcommodity’s three members, invoked ceremonial prayer. Held in the darkness and led by Dr. Gayle Chacon, the prayer acknowledged the artwork’s immediate contingency on weather. Those in attendance recognized that “anything that is reliant on weather must be obedient to weather.” Coming to terms with that contingency, publicly and spiritually, generated another acknowledgment—the collective belief that the mission of the work would persist in the face of any adverse condition. Repellent Fence was as much about process as it was about creating a final product. The wind proved to be a hurdle, but it also shored up the sense of solidarity that was already present in the communal conception and construction of the artwork. Repellent Fence had been an artwork in progress for nearly eight years. A “very indigenous aspect” of the project, the prayer reinforced the bonds of a “transborder community” that mutually labored to make Repellent Fence possible.1

The winds calmed, and the artists, along with numerous community members from Douglas, Arizona, and Agua Prieta, Sonora, succeeded in raising the largest binational land artwork to date. Between October 9 and 12, 2015, twenty-six helium-filled balloons spanned two miles across the US-Mexico border. From their place in the skies and set against the Chiricahua Mountains, the balloons appeared to perform the same role the border patrol perform day in and day out as surveyors of the landscape, their eye-shaped motif highlighted by a palette of yellow, red, black, and blue. Designed as large-scale versions of a commercial product used to repel birds from fruit trees, the balloons’ single holographic eyes and swaying movement are their most menacing qualities. Unsurprisingly, the scare-eyes didn’t do much in the way of repelling in their new context along the US-Mexico Border. In this sense, they were readymades, objects made for one purpose and retooled for another. 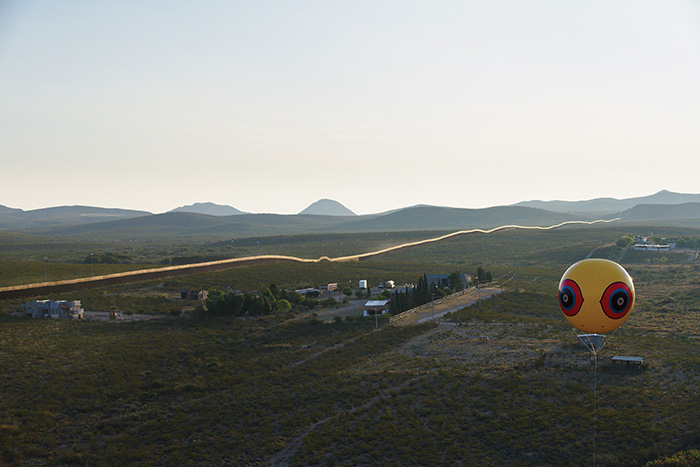 The choice of Douglas, Arizona, and Agua Prieta, Sonora,  was not insignificant for the transborder installation of an artwork that might appear as visually incongruous in the landscape. The two cities, like others that flank the border, have a layered history of connectivity and separation. They are like the faces of Janus, the Roman god of gateways, one individual halved or perhaps doubled, connected in their duality, yet oriented in opposing directions. Indeed, Douglas and Agua Prieta both merge and diverge along the border, with families spanning both sides. Thoroughfares such as Douglas’s Pan American Avenue run southward across the border, transforming into Avenida 6 at the point of the international division. Before that, railroads connected Douglas and Agua Prieta, both founded around 1900 in response to burgeoning resource extraction and refinement industries. At that time, the Phelps Dodge Corporation built its company headquarters in Douglas (named after a mining engineer, James Douglas), importing labor and minerals from northern Sonora and western Chihuahua to sustain copper smelting operations; Arizona was, in those years, still a territory and the Mexican Revolution wasin full swing. Shared industry and capital flows between the two cities made boundaries much more fluid then, despite Mexico’s political instability, as Gilded Age fortunes relied on this transnational system of import and export.2 More than that, locating smelting operations in a territory foreshadowed Arizona’s incorporation as a state in the union in 1912. Today, the headquarters of Phelps Dodge no longer reside in Douglas, having migrated elsewhere in the 1980s. In the wake of the corporation’s departure there lies a depressed economy and a division between North and South that community members continually attempt to bridge. Agua Prieta, alternately, is now a city of maquiladores. Despite vast kinship networks and common economic struggles, each city has become more alienated from the other in recent years.

A border wall now separates the two, continuing further eastward and westward, in total spanning a continuous 580 miles between the US and Mexico. Both in the landscape as well as current national rhetoric, the barricade between the two countries looms large. As if on a continuous loop, the media spins the borderlands as places of immense danger, as well as the sites upon which to erect the nation’s first line of defense against two common enemies: immigrants and drugs. Made possible by Homeland Security, the wall has become a space controlled as much by the presence of border control agents and blockades as by words and images. Both wield much power on the lived realities of local residents, immigrants, and our collective consciousness.

As I think about something like the North American Free Trade Agreement (NAFTA) crafted in 1992 between the US, Mexico, and Canada, I am reminded of how such contracts between nations and their representatives work from the top down and how they often neglect to consider how those on the bottom might otherwise be affected. Moreover, it is often the case, as the shared past between Agua Prieta and Douglas reveals, that such transnational transactions revolve around the exchange of commodities and hard, often undercompensated, labor for the benefit of a mere handful. In contrast, working from the bottom up—and on the basis of oral agreements—held the promise of another type of transnational transaction, one based upon a shared intentionality for the project and a sense of community self-determination that went beyond governmental forms of public policy and commodity exchange. As a project based upon expressly indigenous strategies, the conditions of Repellent Fence’s creation fostered communication between Agua Prieta and Douglas, the project as a whole becoming a kind of portal for mestizo people on either side to confront the wall and the rhetoric around it as a profound source of anxiety. That portal, however fleeting, also enabled citizens on either side to celebrate their shared indigeneity. For even before the roads and rail that connected one city to the other, the lands between Agua Prieta, Douglas, and beyond were once home to nomadic peoples, Apaches and Yaquis who roamed without recourse to national boundaries. 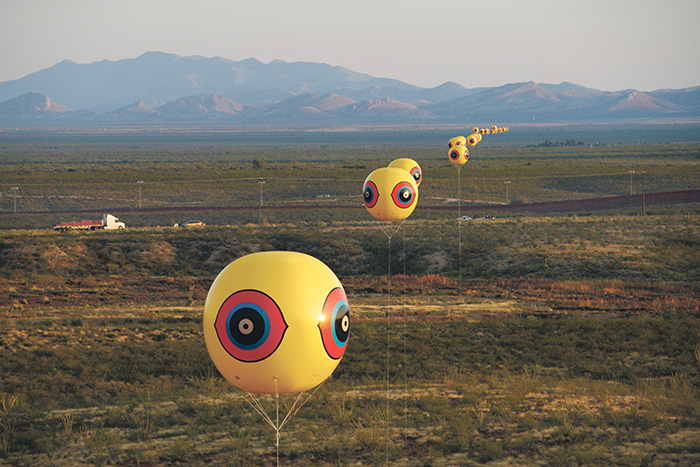 In stark contrast to the interminable disciplinary force of the border control and the fence it seeks to protect, the presence of the balloons was ephemeral. They hovered in the skies for a matter of days. As an impermanent installation, Repellent Fence was also unlike the majority of other more enduring land-based artworks that now populate the Southwest, including Walter de Maria’s The Lightning Field (New Mexico), James Turrell’s Roden Crater (Arizona), and Michael Heizer’s Complex I (Nevada). Though fleeting, the project continues to resonate in both Douglas and Agua Prieta. Roberto Uribe, a cultural liaison and local business owner who aided in Repellent Fence’s creation, was recently elected as mayor of Douglas. Additionally, Dia de los Muertos has become a transborder celebration, where, prior to Repellent Fence, that was not the case. In hindsight, Repellent Fence was and continues to be a site where two sides could foresee becoming one, even under the most improbable of circumstances. As Martínez pointed out, “we’re predestined to be together.”5