At first I noticed the smell, earthy almost. Then there was shade and a flush of coolness. I had entered Rafa Esparza’s Figure/Ground: Beyond the White Field, an immersive artwork installed in the John R. Eckel Foundation Gallery at the Whitney Museum of American Art. One of sixty-three artists and collectives invited to participate in the Whitney’s 2017 Biennial, Esparza overlaid thousands of individual adobe bricks onto an otherwise white cube. Larger adobe tiles completed the installation, covering the grey concrete floor with an uneven layer of brown. Here, Esparza extended the craft of making adobes, one he initially learned from his father, to his art practice. He took one step further by inviting other queer artists to become fellow adoberos to help in the massive undertaking; all together, they created nearly five thousand adobes for the installation. In completely inhabiting the space, Figure/Ground created its own microclimate; anyone familiar with adobe buildings, which pepper our own New Mexican landscape as much as sagebrush, knows this feeling of being surrounded on all sides by earth. Indeed, Esparza enveloped visitors in what he called “brown matter,” a mixture of hay, clay, horse dung, and water from the LA River, all baked under the light of the California sun.

This year’s Biennial has generally garnered praise for its ability to position art as a barometer for the times. The subtext of the statement is that this seventy-eighth installment means to reflect and critique the social upheaval that currently characterizes America under the Trump presidency. With the anti-black, anti-immigrant, and anti-environmentalist animus that continues to gain traction, artists from all backgrounds speak back. Still, it’s not just a matter of diversifying museum spaces to be more inclusive, though that is important. The complexity of identity now demands new strategies for envisioning ourselves, others, and the institutions we find ourselves bound within. In that vein, Esparza’s installation actually creates a space of color, one he says reflects his own skin. It’s no surprise, then, that the white cube is covered in an adobe wall, the brown matter—a staple of the artist’s practice in LA—laden with the implications of brown identity across a very broad spectrum. 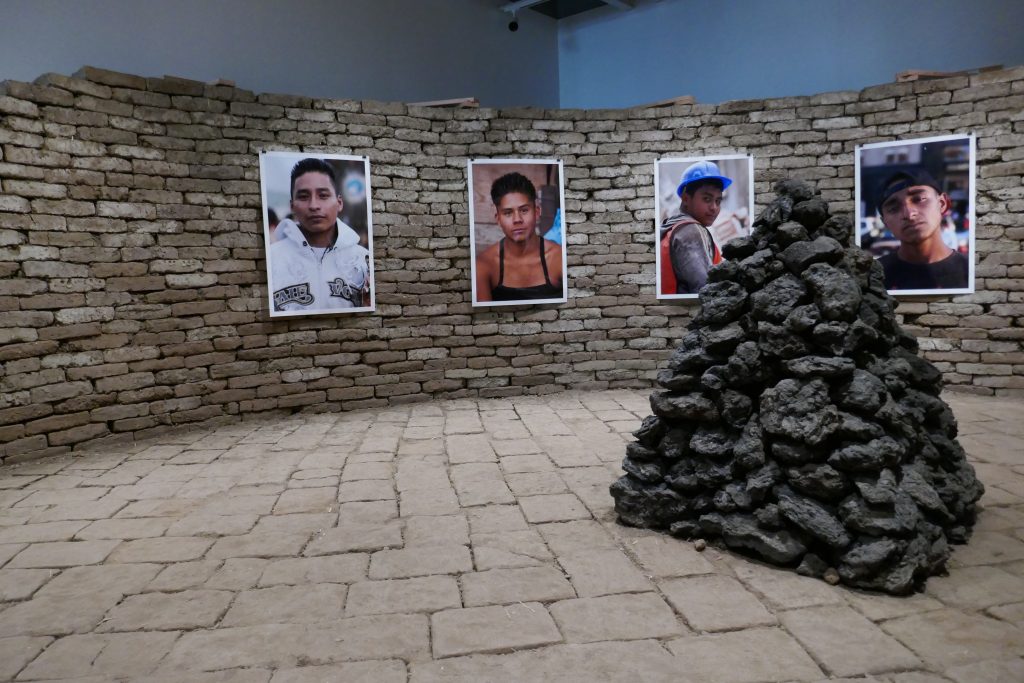 The question arises: what makes brown identity? The installation doesn’t give a ready answer, but all sorts of associations do come to mind: the Brown pride of past and current Chicanx and Latinx peoples, as much as the denigrating characterizations of Central and South Americans. Brownness can be a badge of pride as much as an oppressive projection. I find this to be the most challenging and compelling aspect of the installation. Esparza’s use of material, adobe, not only references melanin-tinted skin but also a diffuse field of discourses on race, nationality, ethnicity, and gender and the intersections therein. Brown matter thus suggests this paradox of brown identity. That is, Figure/Ground gives form to experiences and identities that can and can’t be pinpointed. It gives form to a sense of solidarity and belonging; brownness is a shared trait that crosses all sorts of borders, while adobe as a building material can be found from the artist’s family’s home state of Durango in Mexico, all the way to the Mosque of Djenne in Mali. It also gives form to the often-unexpressed feeling of unease that comes with being profiled by one’s skin color. Finally, it brings to mind the act of displacement; uprooting earth from LA and putting it into another context recalls the many forms of displacement that are currently taking place, from immigration to exile. When brown matter literally takes up space, we are challenged to confront brownness in all its connotations.

Esparza invited five other artists not formally included in the Biennial to exhibit their mixed-media artwork within the adobe rotunda. Large format photographs (Dorian Ulises López Macías), a cairn composed of volcanic rock (Beatriz Cortez), a fake Southwestern artifact (Gala Porras-Kim), and a spare mural inhabit the space (Eamon Ore Girón); Ramiro Gomez, alternately, made the installation into his temporary painting studio. Esparza will also be performing inside the gallery with Nao Bustamante. The adobe rotunda thus played multiple roles: it was an artwork unto itself, as well as a space for exhibiting the work of others. It was both figure and ground.