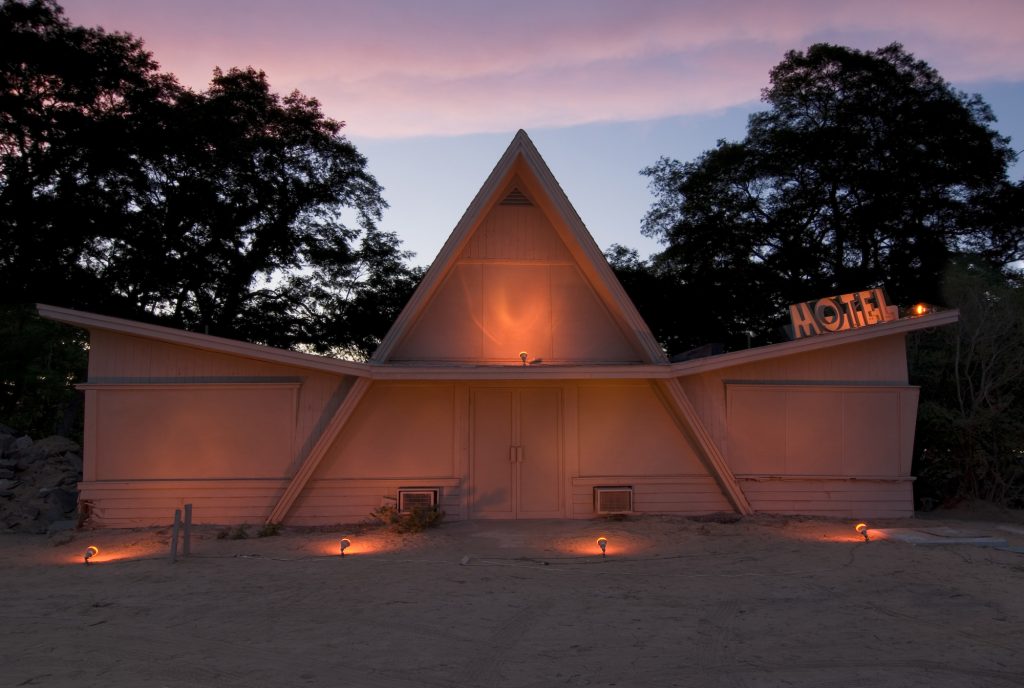 Alicia Inez Guzmán: Can you say a few words about yourself and how you “came out” as an artist?

Jay Critchley: I was thirty-three years old when I had a rebirth and found my unadulterated self as an artist. I’m a “born again artist.”

I had come out as a gay man four years earlier – married to my wife with our newborn son. I grew up in a large, very religious, Irish Catholic family with eight siblings – six sisters and two brothers. Unearthing my repressed artist identity was even deeper than being queer.

AIG: Do you consider your practice to be land-based? And what does that designation mean to you?

JC: The word “land-based” is a relatively new term when talking about artists working with environmental issues. Human’s relationship with the land, the environment and the ecology, and the sustainability of all life forms has been the basis of my work since 1981 when I created a series of Sand Cars in the waterfront parking lot in Provincetown, MA. The tip of Cape Cod is entirely a sand dune and the sculptures, over four summers, included a sand-encrusted car, the Sand Family (Ron and Nancy Reagan), a sand-filled car (a “fulfilling summer”), and a sandblasted car. The materiality of place created a conversation about tourism, petroleum and energy, time, consumption, the definition of art and the American Dream machine. 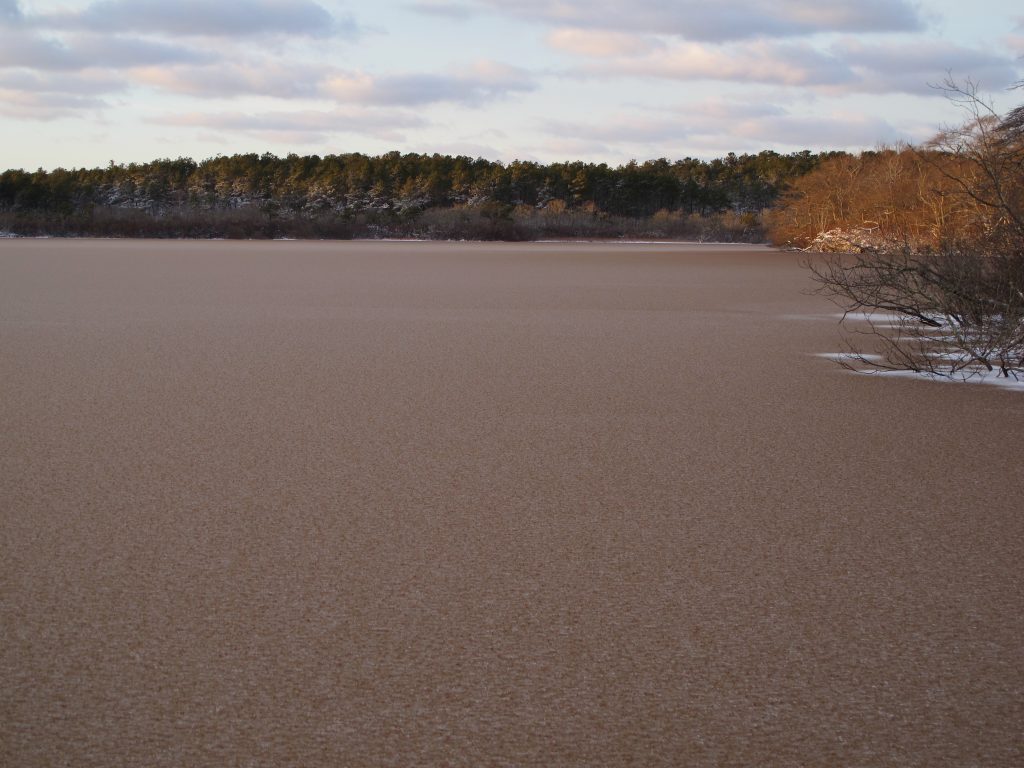 AIG: You mentioned before that your practice is about “covering things.” What materials have you used to cover and what are you covering? To what end?

JC: It became apparent to me recently that much of my work is about covering and uncovering, covering up, masking and transforming both objects and ideas. Using the fish skins of Cod or Flounder to cover the Pieta or a Pilgrim hat references depleted fish stocks, the layered meaning of the valuable and sacred skins. Exposing the fear and hysteria of pathogens generated by the media led me to see the tie-string surgical mask as a symbol of the muzzling of speech and a “masking” of the systemic causes of environmental disruption and climate change. 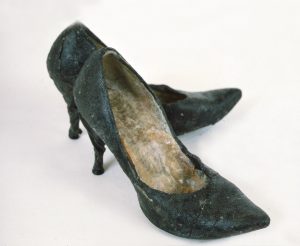 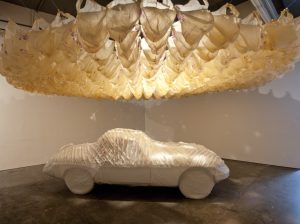 The Old Glory Condom Corporation: worn with pride, countrywide was the ultimate “cover up” – a patriotic condom company that uncovered the government’s hypocrisy, the invisibility of HIV/ AIDS and the sex-negative attitudes of the US Trademark Office, which stated my application was “immoral and scandalous to associate the flag with sex”. I ultimately won the trademark for my “condoms with a conscience” after a three-year legal battle.

And we know that condoms come from land-based rubber trees in the disappearing rainforests. The Blessed Virgin Rubber Goddess – Immaculate Protection, Protectress of the Rainforest, spoke to this issue. 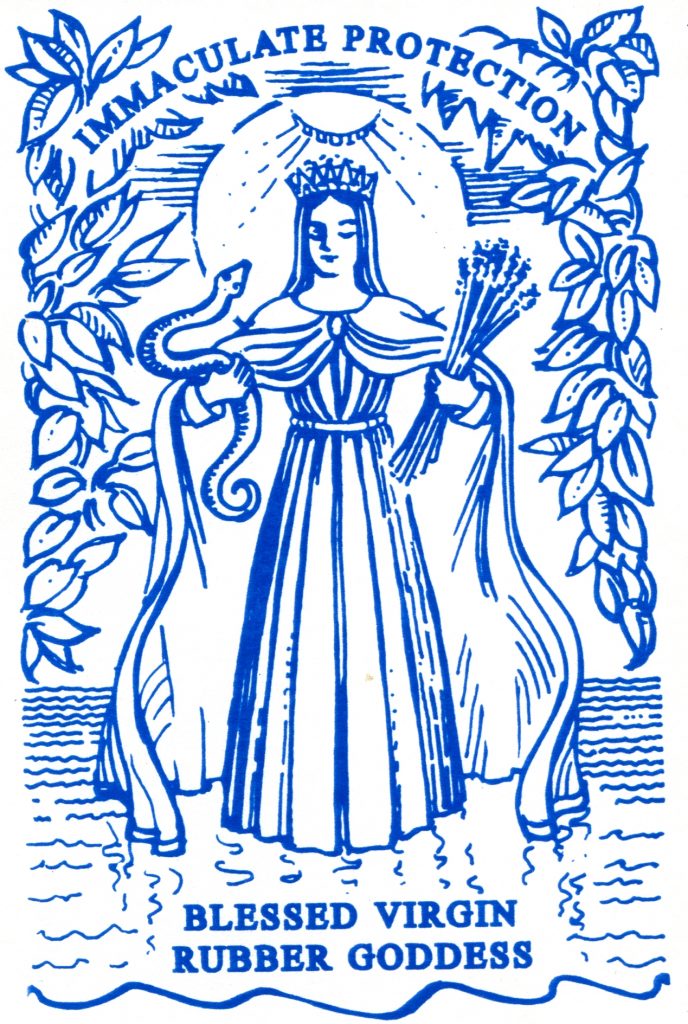 AIG: In other works, you use “the corporate structures as a platform to talk about alternate ideas.” How exactly do you go about these interventions and what kinds of ideas are you trying to talk about? 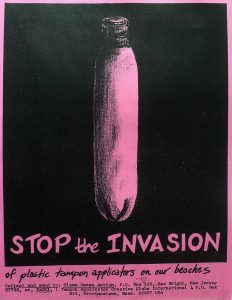 JC: Decades before the dangerous Citizens United Supreme Court decision classified corporations as individuals, I was concerned about their overreach and influence in our culture and in the democratic process. As an artist I created corporate platforms to speak as a visible and expert CEO about: nuclear energy (the NRC, Nuclear Recycling Consultants); overconsumption, greed and environmental degradation (the IRS, International Re-Rooters Society and its annual ritual and purging); plastics in the marine /toxic shock syndrome (TACKI, Tampon Applicator Creative Klubs International, with Miss Tampon Liberty’s gown “covered” with 3,000 applicators washed up on beaches from Boston’s faulty sewage system); and climate change (Global Yawning and Mobil Warming).

I don a suit and tie when filing legislation, holding a press conference or representing the corporation at meetings and official gatherings. Other actions have included public proposals, installations, billboards, postcards, performances and ceremonies and rituals. 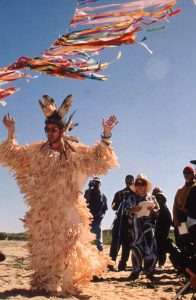 AIG: What did the project you created while in residence at Santa Fe Art Institute, THE WhiteNESS House – Tarred and Feathered, entail in terms of concept and creation?

Our nation’s home takes on an ominous presence with a white President who has defined much of his Presidency based on color – following a black President. How white is a Whiteness House after a black President? How does a white house express its whiteness? Is white the binary of black? Can white exist without black?

The Whiteness House – tarred and feathered is a walk-in model of the White House (14’ w x 7’ high x 7’ deep) developed, constructed and presented at an artist residency at Santa Fe Art Institute in 2017.  It was designed to be disassembled and to travel. 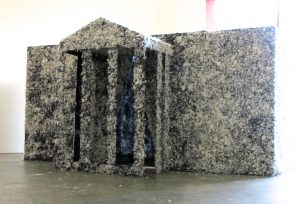 Tarring and feathering is a form of public humiliation used to enforce unofficial justice or revenge. It was used in feudal Europe and on the American frontier, mostly as a type of mob vengeance. It is meant to humiliate and severely criticize a person. I am white and I’m exploring my ethnicity and bringing visibility to what it means to be white.

AIG: You’re talking about the white house as a racially white space. How does your project investigate that whiteness?

JC: The public presentation of The Whiteness House in Santa Fe included an interior installation with sound, performances and a panel discussion, “Why Whiteness?” Performances included: my invocation, “O Breaker of Bones,” and a lip-sync dance to Nancy Sinatra’s, “These boots are made for walkin” (with tarred and feathered boots); local artist Peggy Diggs’ Whiteness Project, whereby she passed out white cookies with sayings from the people she interviewed for her project; and local activist artist and poet Israel Haros Bustos.

AIG: What is the future of THE WhiteNESS House – Tarred and Feathered?

JC: The project intends to engage artists, communities and the public to activate the structure and its interior with installations, multi-media performances, meditations, videos, interventions, ritual, readings, dialogue, dance and music. This project is about transformation and redemption and how we harness the great divide.

The Santa Fe structure was constructed and designed to travel, but the project is flexible and can adapt to the scale and volume of a particular site. I am looking for indoor and outdoor art and community spaces to take the project and to invite creative responses and dialogue about issues of race, ethnicity and whiteness.