Red, yellow and pink fluorescent light beamed out of an all but dark crevice. You might not know that though. At least I didn’t, not from my particular vantage point looking up into Cueva Vientos. I had to really focus to find the subject, the artificial light I had been hiking toward through a lush forest for just under an hour. Amidst the mostly dark interior, the noises emitted from the rapid movement of bats’ wings and a single, but strong shaft of light that carved through the darkness, there it was, something that can only be described as an errant light saber. Before me was Dan Flavin’s Puerto Rican Light (to Jeanie Blake) from 1965 renamed for its new context in a cave as Puerto Rican Light (Cueva Vientos). The installation was made possible by the artist duo of Allora y Calzadilla, who have lived in San Juan, Puerto Rico since 2000, and the Dia Art Foundation in New York.

Though the Flavin Estate didn’t agree to the installation of an original Flavin in the cave, the Dia, which owns the work, moved forward on the project anyway. As of now, Puerto Rican Light (Cueva Vientos) has no scheduled closure. 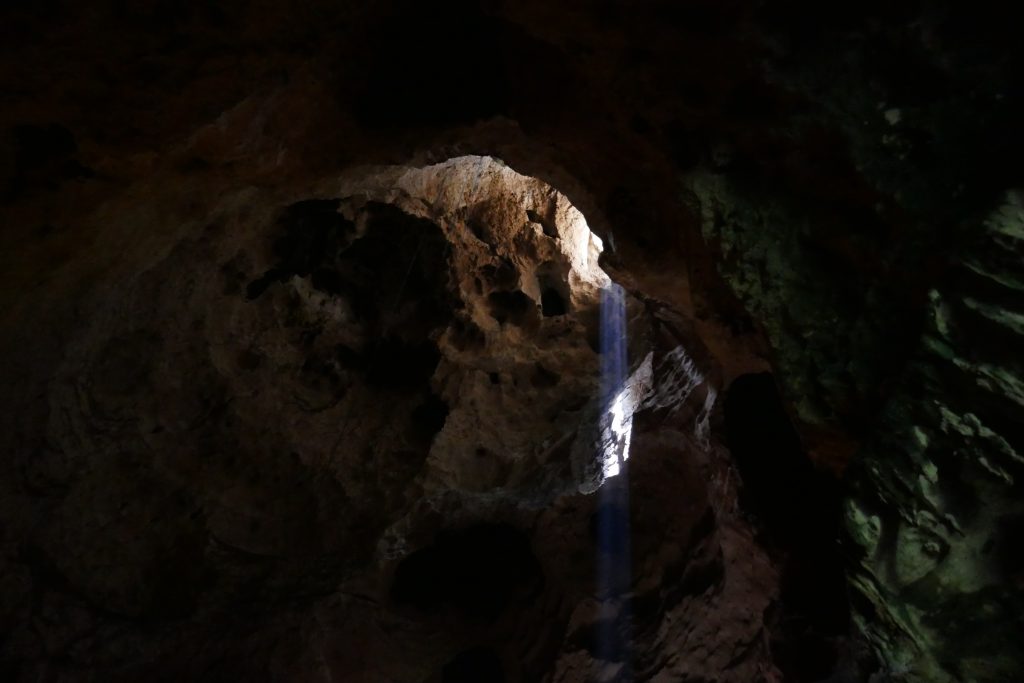 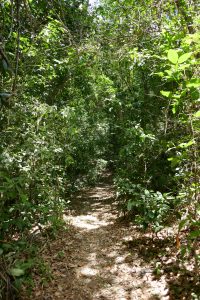 There, inside the darkness, the fluorescent bulbs rose to eight feet. Their placement deep in the cave, however, made the long tubes appear minuscule, a mere thumbnail, the distance between myself and the bulbs reducing my perception of the three colors to a reddish glow (photographs are prohibited). The darkness was vast, so much so that it seemed to nearly swallow the Flavin. It was like a charcoal vortex that both muted the light as much as served as the only real measure to gauge its scale, aside from the stream of natural light that stretched at least 100 feet from the ceiling of the cave to the floor. As I looked on, the cave made Dan Flavin’s Puerto Rican Light (Jeanie Blake) feel underwhelming unto itself. But the cave, in tandem with the new installation of Puerto Rican Light (Cueva Vientos) was the artwork, at least according to the artists.

My impulse to separate one from the other, to always think them differently and apart remained irreconcilable with the artists’ intentions to think the cave and the artwork together, as a fully integrated whole. This logic isn’t so surprising when taking into account Dia’s other projects, namely Walter de Maria’s The Lightning Field in New Mexico. In de Maria’s estimation, the surrounding landscape wasn’t a stage for the one mile by one kilometer installation of stainless steel poles, but an essential part of the artwork.

Dan Flavin has no real ties to Puerto Rico. In fact the link between the name and the work are for all intents and purposes superficial. According to Alexxa Gotthardt:

The genesis of Flavin’s title is fairly simple. In 1958, New York’s first-ever Puerto Rican Day Parade animated a stretch of Fifth Avenue. And in the mid-1960s, a woman named Jeanie Blake, who worked at Green Gallery, where Flavin had his breakout show in 1964, saw one of the artist’s fluorescent lights. She told him it reminded her of Puerto Rico, whose colors she knew only from attending the parade, which became a perennial New York celebration.

It may seem simple to interlink the color of the artwork to the parade and thus to the island. But of course the introduction of Puerto Rican culture and its commodities into the contiguous U.S. is far more complex. It’s a relationship that has been on the latter’s terms for some time.

In 1898, the U.S. annexed the island from Spain under the pretenses of liberation from Spain. In hindsight, the American government sought to gain a more advantageous military position in the Caribbean as well as to plant the seeds for a new era of colonialism best described in a Truth-Out article titled “No More Colonialism Disguised as Financial Assistance: The US Must Relinquish Puerto Rico.” Consider for a moment that Puerto Rico’s first appointed governor was also the president of what later became known as Domino Sugar.

Beginning in the mid-twentieth century, the U.S. began prioritizing Puerto Rico’s industrial potential through a program called “Operation Bootstrap.” By allowing U.S.-based companies to relocate to Puerto Rico, those same companies could take advantage of a much cheaper labor force and heavy tax exemptions. The outright goal of Operation Bootstrap was therefore to move the island away from its agricultural and mostly one crop economy of sugar cane production to an industrial one, increasing the number of salaried employees in the process. The new industrial economy created a highly dependent relationship between the U.S. and Puerto Rico in which the island’s exports almost wholly go to the U.S. Likewise a major share of America’s exports go to Puerto Rico. And while the U.S. officially declared that Puerto Rico ceased its colonial status in 1952, the reach of the U.S. government is more comprehensive than you might imagine:

The question is where and does the artwork fit into all of this? See Part II of this post.