Figure Ground: Beyond the White Field suggests what brown identity might stand for without essentializing it into one trait. In a review of the exhibition that came out in this month’s issue of THE Magazine, I described the work’s suggestive power in the following terms:

The question that arises: What makes brown identity? The installation doesn’t give a ready answer, but all sorts of associations do come to mind: the Brown pride of past and current Chicanx and Latinx peoples, as much as the denigrating characterizations of Central and South Americans. Brownness can be a badge of pride as much as a oppressive projection. I find this to be the most challenging and compelling aspect of the installation. Esparza’s use of material, adobe, not only references melanin-tinted skin, but also a diffuse field of discourses on race, nationality, ethnicity and gender and the intersections therein. Brown matter thus suggests this paradox of brown identity. That is, Figure/Ground gives form to experiences and identities that can and can’t be pinpointed. It gives form to a sense of solidarity and belonging; brownness is a shared trait that crosses all sorts of borders, while adobe as a building material can be found from the artist’s family’s home state of Durango in Mexico, all the way to the Mosque of Djenne in Mali. It also gives form to the often-unexpressed feeling of unease that comes with being profiled over one’s skin color. Finally, it brings to mind the act of displacement; supplanting earth from LA and putting it into another context recalls the many forms of displacement that are currently taking place, from immigration to exile. When brown matter literally takes up space, we are challenged to confront brownness in all its connotations.

Other artists’ works inhabited the space, too. Beatriz Cortz’s Cairn, a triangular pile of igneous rock towered in the center. According to the artist’s website, the cairn carries multiple significances:

Cairn is a structure made of stones that serves as a landmark. Indigenous peoples have built cairns for centuries to mark the way, to mark sacred ground, to mark a burial ground, or as other forms of often nomadic landmarks. Within modernity, a cairn is often used to delineate private property or to trace the border between two nations. In Los Angeles at the turn of the twentieth century, this indigenous way of building was used to build craftsman houses in what came to be known as a vernacular style of construction. It was a syncretic way of building within and outside modernity, usually, with the local stones that are available in the area. However, this Cairn is made with lava rock from the volcanic fault that connects the city of San Salvador and the city of Los Angeles. Therefore, Cairn exists at once in multiple temporalities, simultaneous locations, and multiple understandings of the world, moving in and out of modernity, marking the ground, and looking towards a multidimensional future. 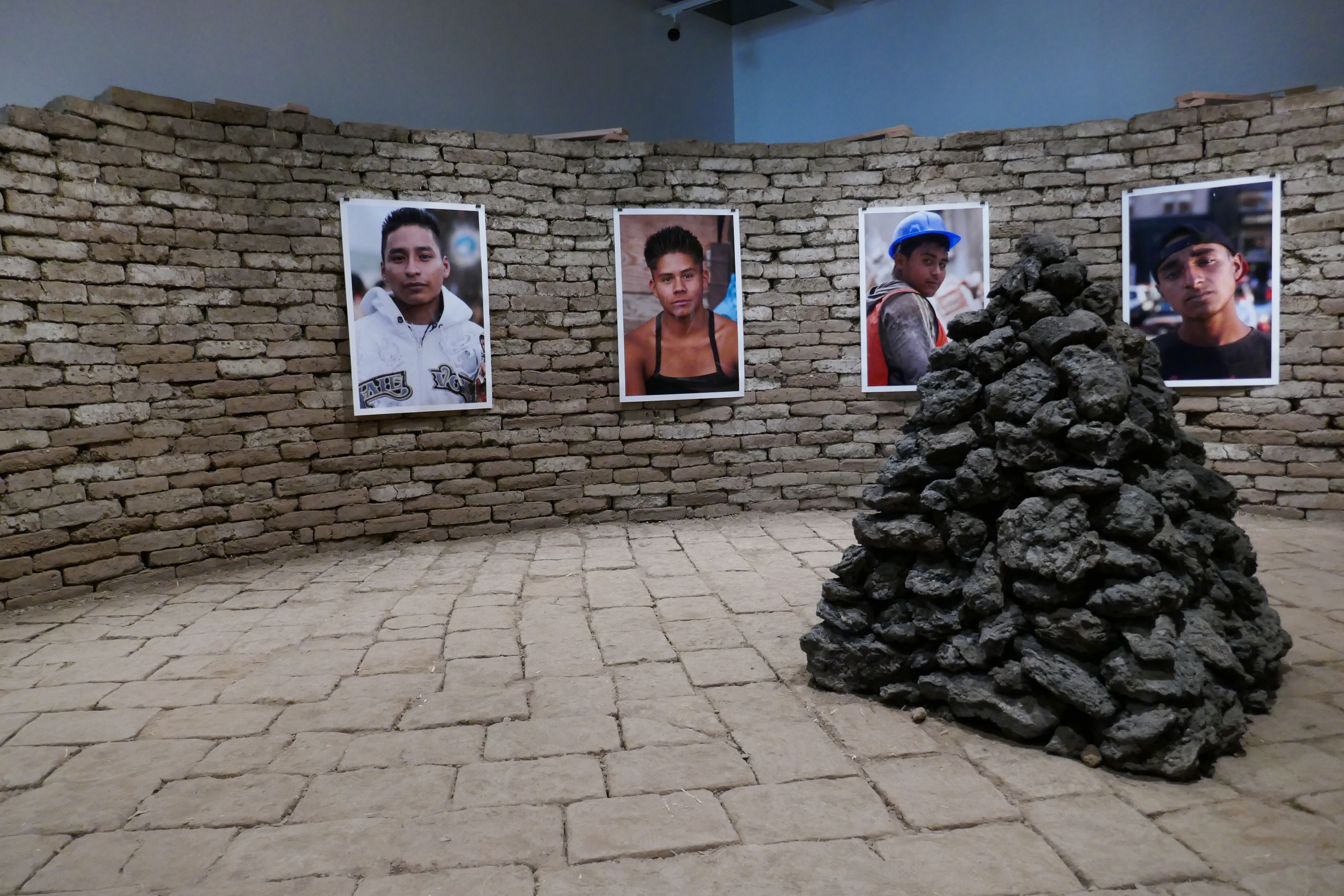 Dorián Ulises López Macías’ untitled inkjet prints from the series Mexicano present the expressive faces of those he encounters in his day-to-day life. His instagram feed is the virtual space where he exhibits these countless portraits taken both with his camera and his cellphone, extemporaneous snapshots that are driven by a curiosity to depict the vast spectrum of Mexican identity.

Gala Porras-Kim Reconstructed Southwest Artifact, c. 900/2017/2017 is a white amorphous shape housed in a shelf inset into the adobe. White in color, the smooth white surface is punctuated by a pottery sherd. It’s tongue in cheek, a nod to archaeological histories of remaking entire pots from a single sherd. This has certainly been the case in New Mexico where Mimbres pottery has often been totally remade from fragments, and considered authentic even when the pot is mostly reconstructed with modern materials.

Eamon Ore-Giron presents a spare, geometric mural painted directly onto the adobe bricks. It’s called In nite Regress XX and takes after a series of similar paintings of prismatic shapes on linen. The adobes are similar in color to the linen, a kind of textured brown. Ore-Giron is a DJ, multi-media artist and painter who has roots in Peru and Tucson. The motifs he uses and the subjects he tackles often reflects this cross-section in his own background. 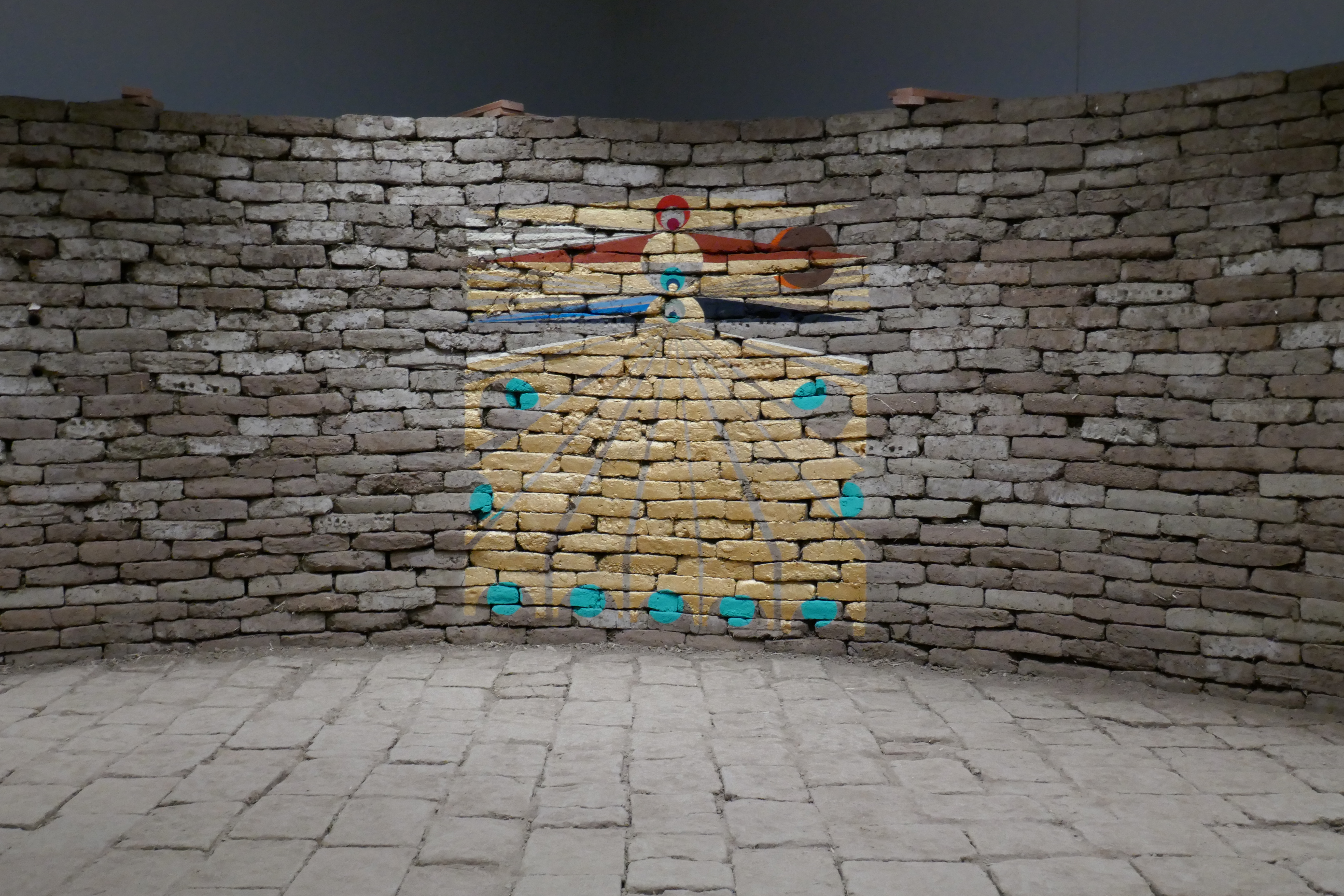 Before the exhibition closed, Ramiro Gomez also used the space as his temporary artist studio. Known for painting portraits of unacknowledged labor; this includes immigrant laborers for this most part. These have ranged from portraits of gardeners in LA, janitors in at the Denver Art Museum, and here, the Whitney’s staff. As in other instances, these brushy portraits are on cardboard; when finished they are gifted to those pictured. Esparza and Nao Bustamante also performed in the rotunda before the Biennial closed, removing the bricks to create moving platform.

The adobe rotunda thus played multiple roles: it was an artwork unto itself, as well as a space for exhibiting the work of others. It was both figure and ground.

Now, the bricks are on their way to Marfa. Their migration from one site to another, and from one configuration to another shows the medium’s adaptability. Adobes, change, move, transform, and deteriorate. They are weighty, “brown matter,” political in their suggestion of both identity and immigration, of labor and intersectionality. And by taking up space, they are a fierce and undeniable argument for belonging.